It seems like everyone has either seen a UFO or knows someone who has. Below are 10 of the most amazing stories out (and up) there, beginning with the original UFO sighting that became the genesis of the verbiage, flying saucer.

The year: 1947. Seattle businessman, Kevin Arnold, was piloting his airplane when he suddenly witnessed several strange shapes soaring atop the apex of Mount Rainier.

In amazement, he relayed that the “undulating” objects “skipped like saucers across a pond,” all at speeds quicker than deemed possible, or ever witnessed prior.

The term flying saucer was coined from his description and has stuck ever since.

2: The Great Airship Sightings
In November 1896, long before Kevin Arnold’s Mount Rainier sighting, people were spotting sky-born phenomena that defied logic. First, a light dangling beneath a cigar-shaped object traversing the night horizon was observed by hundreds in Sacramento, then San Francisco, California.

Many more sightings were recorded across the Pacific area of the United States that perpetuated a massive media melee. The UFO sightings diminished for a short spell until UFOs were once again reported hovering over the Midwest down into Texas. They reports ceased altogether in May of 1897, making 1896 the year of UFO flap (cluster) sightings. 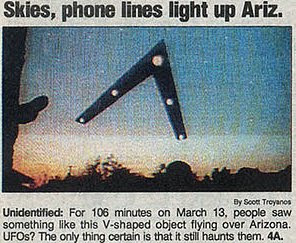 Fast forward a century to a huge vision in the Arizona sky that was seen by many — including the Governor of Arizona.

Was this a military exercise? Big object, big controversy. The jury is still out.

In the summer of 1952 Truman ruled the White House — and something strange was frolicking in the skies above.

During the weekends of July 13 & 29, airport controllers saw blips on their radars and puzzling orbs of light on the horizon. The Air Force tried to corral the objects, but to no avail.

Truman put the Robertson Panel into action. These scientists spent several days going over the best UFO stories that had been amassed by Project Blue Book (a decades long Air Force study of 12,000-plus UFO reports).

The consensus was that the government should worry more about debunking UFO accounts instead of analyzing them, and Project Blue Book was canned. The government’s credence in UFO cases is often suspect because of it.

A model of the crashed object (Photo credit: Wikipedia)

The night sky of December 9, 1965, was flooded by a huge fireball witnessed by multitudes from six U.S. states and Canada. The ball flew at astounding velocity and landed in the middle of a forest in Kecksburg, Pennsylvania.

Many figured it was a meteor, but when the close-lipped Army spilled into town and removed a bell-shaped object, they began to wonder.  It was shaped like the Liberty Bell. A crashed Soviet satellite? A UFO?  The issue was, and still is, hotly contested.

Robert Taylor was a forester in Livingston, Scotland, who came upon a dome-shaped entity on the forest floor. Two small round objects scuttled toward him and he was rendered unconscious.

When he awoke, the orbed objects were nowhere to be found. His clothing was ripped and odd tracks remained on the ground. Scottish officials were left baffled.

In 1961 Barney and Betty Hill were traversing a deserted road by Groveton, New Hampshire, when they saw something odd in the evening sky. They each “lost” several hours of time, neither having any idea what had happened to them; while awake, that is.

Asleep, however, they both endured raging nightmares in which they were enlisted as medical specimens to a group of “grey aliens.” They underwent hypnosis and the doctor concluded that they had been influenced by a TV show featuring aliens they’d recently viewed.

Were they abducted? Were they cuckoo? Do the Hills even know?

8. Japan Air Lines Flight 1628
Imagine flying to Alaska on November 16, 1986, and seeing a massive object “three times larger than an aircraft carrier” flying alongside your plane. What the….?!

This UFO was seen by all the passengers and pilots and was visible on both military and civilian radar. It remained in view for a full 50 minutes. Even more astounding: the crew opened up to the media, which was a rarity.

Prior to the mid 1970s, many UFO sightings were less than credible because they weren’t backed up by radar evidence. This changed in 1976 when radar picked up something sailing furiously over Tehran.

Iranian jet fighters were commissioned to hunt down this anomaly. Amazingly, as they got closer, their  electronics became inoperable, and even caused a plane’s equipment to fail completely, just when it was poised to fire.

The radar proof coupled with the electronic systems failure make the Tehran incident one of the most exemplary cases ever recorded.

Most everyone has heard about the UFO crash in Roswell, New Mexico in July, 1947.

It occurred about 50 miles outside of town. Farmer Matt Brazell found the area around his farm littered with wood and metal strips. Remembering Kevin Arnold’s incident that same year, he contacted the military.

Authorities investigated the site and concurred that a “crashed disk” had been found. Several hours later the military recanted and stated it was actually a crashed weather balloon.

Decades later, in the late 1970s, Jesse Marcel (the Army Air Force intelligence officer who’d retrieved the crash debris) admitted the debris was no weather balloon. He said it really was extraterrestrial, creating a firestorm of conspiracy theories that continue today.

In the 1990s, the government admitted the story was a ruse to divert the true nature of the object; a top-secret project (labeled Mogul) created to detect Soviet atomic refuse in the atmosphere. Hmmm.

Roswell, New Mexico is now synonymous with UFOs and aliens, making it a tourist Mecca for those with a passion for everything UFO-related.